There are many types of security camera available these days, but there are certain special requirements for a possum (or other wildlife) box camera which you need to consider:

One thing I would also recommend is to be sceptical of advice from people who haven't actually set up a nestbox camera, even if they are otherwise knowledgeable. I once talked to a professional camera installer who worked for OzSpy, and he said that cameras like the ones we have used are no good because moisture condenses inside them, causing them to fail after a few months. While I would be willing to accept that this might be the case for cameras which are left turned off for long periods, the fact is that possum box cameras are kept running continuously and the heat they generate prevents condensation from occurring. The oldest cameras in use have run in excess of 10 years and never has a camera failed electrically.

Also be sceptical of specifications given for cameras in eBay. Generally they will quote stuff like a "1/3" Sony 960H Exview HAD CCD II" sensor, when in fact they have an inferior sensor that is more 1/5". Such an inferior sensor will still generally be good enough for a possum box, but the field of view will be less than expected for a given lens size. Also, power consumption figures are often wrong, but interestingly the quoted figures are more often than not higher than the actual, meaning there is probably no intent to deceive, but instead someone has been copy/pasting the specs of some similar camera.

We have not yet located the ideal camera, but the following types have been used so far.

The first two boxes installed in 2005 had this type of camera. The cameras have now been replaced by different cameras and this type is no longer available

This was a very easy camera to use; there is nothing to configure and no extra hardware needed (except that you'll probably need an extension cable, but Swann sell a matching extension cable as well). For the record, this camera had the following specs:

If you can still find one of these cameras anywhere, it would be an acceptable entry-level camera. The image quality isn't great and the narrow lens angle means you have to aim it carefully for the best picture, but otherwise it does the job and it's easy to work with. 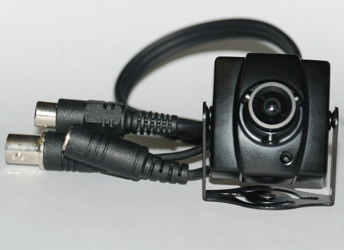 This was the new "standard" camera that was installed in boxes 3 to 7. Unfortunately this type is also now no longer available.

This was a relatively low cost camera (although now overtaken by cheap eBay cameras) and it did pretty much everything that's needed of it. Disadvantages are that you need to build a separate infra-red illuminator (described below) and the mounting screws don't hold it very securely, so it's vulnerable to being knocked out of alignment by inquisitive possums. The specs of this camera are as follows: 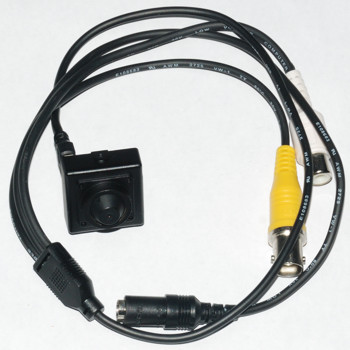 This type of camera was used in Box 2 from October 2013 to July 2020. It was not a success and this type is now no longer used in any boxes.

This camera is very similar to the QC3474. The main differences being that it's smaller and has a "pinhole" lens. It's not actually a true pinhole camera, but merely has a very small lens. The specs are:

The reason why this camera was chosen for Box 2 was that this was a smaller box than the others (it was intended for ringtails) and possums often get very close to camera. This means that the camera needs a very large depth of field to keep the possum in focus. Supposedly, the smaller the aperture of a camera lens, the greater the depth of field, so I had hoped that the particularly tiny lens on this camera would be ideal. In practice, however, the camera was overall worse. 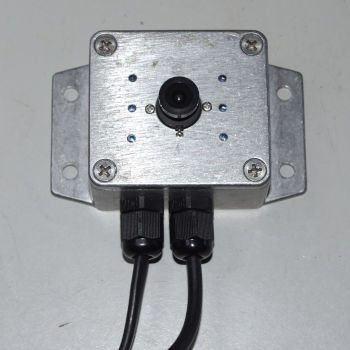 
After the "standard" cameras I had been getting from Jaycar had become unavailable, I had decided to buy cheap eBay drone camera boards and construct my own cameras from them. This was a lot more work than just buying a camera off the shelf, but has the advantages of being cheaper and allowing me to customise the camera better.

This type of camera is currently used in boxes 1 and 2. I may vary the design somewhat for future cameras.

To build this camera it was necessary to remove the IR filter from a drone camera and mount it in a die-cast metal enclosure. The IR illuminator has been built into this enclosure and this required making a custom PCB (printed circuit board) for the electronics. More detail on the construction of this camera is on the blog .

An IR illuminator can be made from a cluster of IR LEDs. There are two main types of IR LED available; those with a "short" wavelength of around 850 nm, which emit a dull red glow, and those with a "long" wavelength of around 940 nm, which are invisible to the naked eye. Unfortunately, cameras are 3-4 times more sensitive to the former type, and therefore illuminators designed for use with (or incorporated into) day-night cameras generally use this type of LED. The Swann day-night camera was an exception to this rule.

For a possum box, you need the "long" wavelength type; you don't want a red glow that might scare away possums and it doesn't matter that it's less powerful since you only have to illuminate the inside of a small box rather than a room or yard.

I have been unable to find a commercially made IR illuminator which is suitable for a possum box. All of them are far too powerful, and virtually all use the "short" wavelength LEDs as well. Fortunately, it's quite easy to make an IR illuminator. The simplest way is to connect a string of around six IR LEDs in series with an appropriately sized resistor, however I decided to use an LM317 voltage regulator as a constant current source to ensure the LEDs would always run at the selected current, regardless of supply voltage variations.

This is the schematic of the circuit I used.

eBay is probably the first place to look for components. It's usually very good; you will rarely get totally ripped off, but a) don't assume you will always get the best price from eBay and b) stuff that's unusually cheap will usually have some catch to it; if you can identify what this catch is, and can deal with it, you can get some great bargains, if not, you can be saddled with something that's unusable.

If you're in Australia and need something fast Jaycar will probably be your first choice. You can also try looking at Radio Spares or Element 14 (formerly Farnell). These two used to be notoriously expensive and will still rip you off majorly for some items, but often you can find stuff cheaper than eBay and they'll deliver super fast.

Most of the difficulties and annoyances related to installing a possum box camera are caused by the need to bring a cable back from the camera. Cables run outside get subject to so much wear and tear that even if they are rated for exterior use (e.g. UV stabilised etc.), it's still better to run them inside electrical conduit.

I ran virtually all of the exterior cables inside 25 mm PVC electrical conduit. I initially used 20 mm conduit, but this is really too small to push the cables through, especially if you've already terminated them (BNC connectors are really fat). If you are running cabling to more than a couple of cameras, you need to go up to 32 mm conduit. I'd also recommend you limit the amount of flexible conduit that you use; the ridges on this stuff make it really difficult to get cables through and the longer the section, the worse it is.

You'll find that in addition to conduit, you'll also require a surprising quantity of miscellaneous fittings (elbows, saddles, junction boxes etc.) to make a good installation, but it's worth the time to do it properly. It's usually best to buy this sort of stuff from your local electrical supplier (e.g. Ideal Electrical or Haymans, if you're in Australia) rather than a normal hardware store because they've generally got lower prices and a better range. A few quick comments:

Don't be shy about purchasing stuff from an electrical supplier if you're not a registered electrician. There are no laws that say they can't sell this stuff to members of the public, and you'll generally find them to be helpful and co-operative.

You can buy pre-made cables with all the right connectors already fitted. These are OK to start with (I used them on the first two cameras) and handy to have available for temporary hookups, but with a larger installation, it's best to cut your own cables to size and terminate them yourself. I have generally used 0.5 mm2 speaker cable for power, RG-59 coax for the video and cheap shielded audio cable for the audio. You can also get a cable intended for CCTV cameras, which consists of both RG-59 coax and figure-8 power cable in the same cable. This makes installation much easier and is recommended if you can get it. Power cables are terminated by either soldering on an appropriate connector or just putting the wires directly into terminals, however the coax is best terminated with a crimp-on BNC connector, and this means purchasing the correctly sized crimping tool. There are screw-on BNC connectors which don't require crimping, but these are not as secure.

It is possible to use RG-6 coax in place of RG-59. There are bitter arguments about the merits of each type on the web; generally, both will work, but RG-59 is usually both cheaper and somewhat more suited to video cameras.