I don't think the nesting habits of suburban brushtails are known in great detail. We've seen them sleeping in various unlikely and uncomfortable places such as rolled-up garage doors, stacks of old car tyres and in the forks of trees. On the other hand, our comparatively safe and comfortable possum boxes have often remained unused for months at a stretch. This might be a result of the possums deliberately giving one spot a rest to put predators off the scent, but I suspect that our nestbox design is far from perfect.

There are a number of commercial suppliers of possum boxes, and also plans for boxes available on the web. Most of these appear to be little more than modified bird nesting boxes. I think that comparatively little science has gone into nestbox design and we're a long way from having the ideal nestbox.

On this page, I'll describe the nest boxes we have in detail in the hope that it might add (if only by a minuscule amount) to the sum of knowledge in this area. 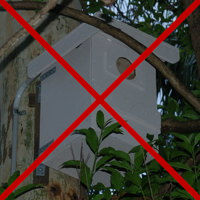 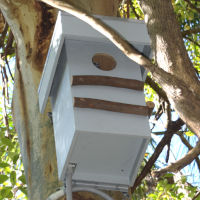 Comments: This is the very first box put up and has undergone a number of changes over time. The hole was originally 150 mm diameter, and on 30/12/2005 (after it was discovered that the brushtails preferred the ringtail box with a 100 mm entrance) this was reduced to 115 mm by the use of a collar. A small fascia board was added at the same time. On 11/12/2008 the box fell out of the tree. After this it was painted, and reinstated with a mounting frame, new roof and new camera. In August 2020 the entire box was replaced.

The new box features some innovations: 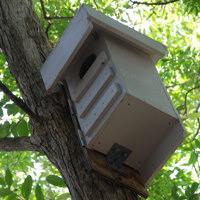 Comments: This box was originally intended for ringtails, hence the very small dimensions. Despite this, it was for a long time favoured by brushtails over all of the other boxes. In August 2009, it was finally used by a ringtail for the first time. For a few months, a ringtail (Gumdrop) used it to bring up her babies. Over the next few years, she visited intermittently with further babies, until Feb 2012 when she was attacked and eaten by a carpet python in this box. Since that time this box has never been used by ringtails, but is often used by brushtails.

On one occasion, a sugar glider visited this box, but did not sleep in it and has never returned.

Comments: This box has proved very popular. It was inspected by a number of possums within a couple of days of installation and was in use soon after. An extra flap has been fixed inside the front fascia board; this was done to reduce light entering the box, which was causing false triggering of motion detection in the early morning. This has reduced the problem, but not eliminated it. 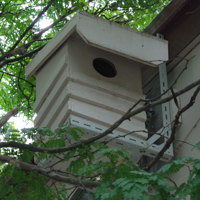 Comments: This box was attached to the house, rather than a tree, in a attempt to attract possums who live in a neighbour's ceiling space. This has been of limited success; the box remained unused for several months after installation and while now is often used by possums is still not the most popular box. Although this box is well-shaded, the camera sometimes suffers from false triggering caused by sunlight reflecting off a neighbour's pool.

On a number of occasions, carpet pythons have slept in this box, which may partly explain its relative unpopularity. 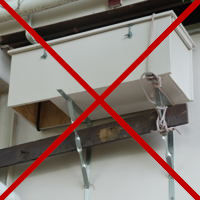 Comments: This box has now been removed.

It was installed in a hurry as a refuge when possums were evicted from a neighbour's ceiling and garage door. It did not achieve this aim; the possums ignored the box and found places to live elsewhere. This box was intended to be similar to the locations in which these possums had been living and breaks a lot of the rules; it's considerably below the recommended height of 4 m and the hole faces the wrong direction. Owing to the hurry in which this box was put up, there was a considerable delay before a camera was fitted.

This box was occasionally visited by brushtails and ringtails, but had only been slept in four times in the three years in which it was up. 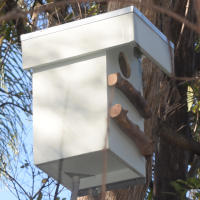 Comments: This box is in a different location to the old Box 5 and has nothing in common with it — the number was just reused. It is a slightly simplified version of the new box 1 design.

Comments: This box is intended for sugar gliders and is constructed differently to the others. The entrance hole is in the back of the box, facing towards the tree trunk (supposedly sugar gliders like having a concealed entrance where they can come and go without being observed). This box incorporates 25 mm of styrofoam insulation, lined internally with 7 mm plywood, on the three walls away from the tree. A separate ceiling of 7mm ply has also been used inside the box.

This box has yet to attract any gliders. In September of 2010 it was taken over by a swarm of bees. These were removed in October 2010 and the box taken down for repairs. The box was only returned to the tree in April 2012. 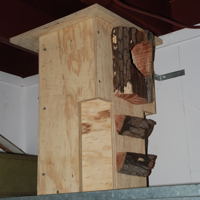 Comments: This box was placed in the garage to entice a possum (Yoshi) out of a tyre in which she had been sleeping. It was never used by Yoshi, but has subsequently been used by other possums (Švejk particularly liked it). This box was built to more closely resemble a tree hollow than the others; it is octagonal in cross-section and a piece of tree branch was used as a collar around the entrance hole.

This box was significantly more difficult to construct than a simple rectangular one, but I feel this design is worth considering in future. 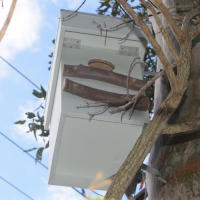 Comments: This box is an identical design to box 5.